The district headquarters is Chhatrapur. Ganjam is divided into three sub-divisions Chhatrapur, Berhampur, and Bhanjanagar. The Imperial Gazetteer of India 1908 lists Ganjam, along with the Thanjavur and South Canara districts, as the three districts of the Madras Presidency where Brahmins were most numerous. As of 2011 it is the most populous district of Odisha (out of 30) 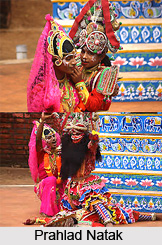 Prahlad Natak is a form of traditional theater with a one-play repertoire from the southern district of Orissa, is commonest in Ganjam. The dance is performed on an open stage at the summit of which the throne of Hiranyakashipu is placed. The text of Prahalad Natak, containing 120 lines is a mixture of Sanskrit and colloquial Oriya. The cultural dance itself is the representation of the social life of Ganjam.

The cultural life and habits of Ganjam is also evident from Bharat Lila, the most colorful presentation of Folk- Dance prevalent in Ganjam. The leading story of Subhadra Parinaya is the crux of the entire performance of the dance and the associated drama.

The key theme which dominates the folk dances of Ganjam is the presiding deities of the inhabitants, which represent that religiosity is an important trait of the cultural life of Ganjam.

Mahurikalua :
The 1st temple is on the mountain and there are stairs to climb the hill, then there is a small cave, through which the temple is accessible. It will take around 45 Mins- 1 hour to reach the Mahurikalua Temple on the mountain. The 2nd temple is down the hill which is just in front of the parking space.
The Goddess is well known in the district and many people come there to pray. The space down the hill is full of long trees and like a jungle which is mostly used as a picnic spot. You can find some inbuilt place to cook and have fun with loud music, dance, play etc.

Kulada :
Kulada is famous for  Goddess Bagh Devi which is the presiding deity, Kulad is said to be the birthplace of great Oriya Poet Kabi Samrat Upendra Bhanja. It is situated to the northwest of Ganjam District with a ruined fort, river Mahanadi flowing in the east and dense forest on the west side of the ruined fort.
Legend speaks that during the 12th century a Bhanja ruler had joined hands with a tribal leader’ KULA’ to be eradicating the foreign invasion. Seeing the danger from the tribe he stained the tribal leader KULA and on the same place, constructed a fort which was later known as Kulad / Kulargad.

Aryapalli :
One of the prominent Orissa beaches, Aryapalli is located at a distance of 6 km and 30 km from Chatrapur and Berhampur respectively. The golden sandy beaches, deep blue sea, and salubrious weather represent the beautiful place of Aryapalli. An important place of tourist interest, the enchanting beach draws several visitors throughout the year who are absolutely thrilled with the captivating beauty of the place.

Maa Bhairavi Temple:
Maa Bhairavi Temple is situated in a remote village ‘Mantridi' near Berhampur city in Ganjam district. This temple pays homage to goddess Bhairavi. The deity is an icon with one leg and four hands craved in a crude fashion. The image of the idol was found beneath the land while plowing and was enshrined as such in a newly built temple in the year 1937.

Budhakhol :
Omm Namah Shivaya, Budhakhol the heritage beauty of Odisha is situated in the Buguda block of Ganjam Dist. It is the symbol of Buddhist culture. The place is filled with full of Trees, Caves, temples and perennial Waterfall, which is the main attraction for tourists and picnickers.

Tara Tarini:
The Odisha Tourism Development Corporation (OTDC) has come up with a package tour to promote the famous Tara Tarini hill shrine in Ganjam district. This tour would be taken up around five times in a month to enable devotees and tourists from other parts of the State to have a comfortable luxurious trip to this famous hill shrine.

Gopalpur-on-sea :
Gopalpur-on-sea is one of the most pristine and popular beaches in Odisha, India. It is located at a distance of around 16 kilometers from the town of Berhampur. Clusters of palm and coconut trees, sand dunes covered with casuarinas plantation divide the beach from the sea water which works as a complete setting for quiet conviviality and introspection.
The sea and the golden sand makes it one of the highly sought after beaches in India. Good accommodation options in serene and calm atmosphere turn it into a favoured holiday destination. Bathing and surfing in the sea waters with the assistance from nolias can be a great experience.

Buguda block of Ganjam district of one of the spot of the Buddhist circuit and archaeological remain of Odisha‘s rich cultural heritage. The place derives its name from budhikhalo that rivers to the meeting pint of old caves., It is also said that the place has been named after Badhesvara- the Buddha in the meditating posture, The place adheres to the Buddhism and Shaivism having both Buddhist images and Shaiva temples.

In 2006 the Ministry of Panchayati Raj named Ganjam one of the country's 250 most impoverished districts (out of 640 districts in total).It is one of the 19 districts in Odisha currently receiving funds from the Backwards Regions Grant Fund Programme (BRGF)

BALAKUMARI TEMPLE THE FAMOUS DIETY OF THIS AREA AND ISTA DEVI OF CHIKITI RAJPARIVAR WAS NOT MENTIONED,ITS BEAUTIFUL SCENERY ,STEPS TO CLIMB THE MOUNTAIN ONE SIDE OTHERSIDE BIKES AND CAR EVEN BUSES CAN GO UP TO THE TEMPLE,ALLFACILITIES AVAILABLE THERE MEALS ALSO.A TOURIST PLACE ONE CAN VISIT 30 KM FROM BERHAMPUR