Kendrapara District is an administrative district of Odisha state in eastern India. The town of Kendrapara is the district headquarters. Kendrapara District is situated in the eastern portion of the state and is bounded on the north by Bhadrak District, on the east by the Bay of Bengal, on the south by Jagatsinghpur District, on the west by Cuttack District and on the north-west by Jajpur District.

The Baladevjew Temple is located in Kendrapara. A Car Festival or Rath Yatra is held in the month of Ashadha(June/July) every year, the car of Lord Baladevjew is known as Brahma Taladhwaja and considered as the biggest car of its type in the whole world. The Gajalaxmi puja on Kojaagari Purnima or Kumar Purnima Durga Pujaat Amruta manohi village is celebrated in the month of October and Kartikeya Puja in November and Maa Kali Puja at Olaver are held each year. Gajalaxmi puja is a big festival here and is celebrated for 7 days. Maa Basanti Durga Puja in Basupur is one of the famous festivals in the region. Maa Kali Puja in Olaver is one of the famous festivals in the region. The Oriya sweet dish, Rasabali, originated from Kendrapara. Kendrapara is also known as Tulasi Ksherta (as Tulasi, different from basil tulsi is the wife of Lord Balabhadra) and Gupta Kshetra (Lord Balabhadra wish to stay here secretly). Different types of prasad prepared and used in Baladevjew Temple are Rasabali, Potali Pitha, Magaja Ladoo, Kakaraa, Khaja, Karanji, Chhena Kheeri, Ghanabrata, Dahipakhala, Khiri, Puri etc.

There are several tourist places in Kendrapara. Batighara is the first lighthouse installed in eastern coast of India. It is surrounded with pleasant natural beauty. In front of the Batighar, False Point Port was the first modern port of the Odisha coast. This port was commissioned in the year 1855. Kanika Palace is one of the most popular tourist places in Kendrapara District. It is situated in Rajkanika block and around 50 km from Kendrapara. The beauty of the palace is unbelievable. Aul Palace is another tourist site and it is an ancient palace spread over 40 acres of land. Other structures like Rajbati, Ranimahal, Ghodashala, Bhandar, Udyan, Pramoda Udyan, Debalaya, Devi mandir are included in the palace. Dhamara Port is an ancient port on the bank of river Baitarani, around 5 km from Kanika Palace. Kudanagari is an ancient center of maritime business, which is situated in Patkura constituency. A massive sand dune sprawling over 15 acres of land and of a height 25 feet, surrounded by deep forest is a popular pilgrim center. All the places of interest of Kendrapara District are worth visiting. The district is known for its Temples, Fairs and Wildlife Sanctuaries. Notable tourist places are 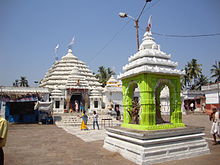 Bhitarakanika is covered with deep mangrove forests and saline rivers. It was declared a Sanctuary on 21-04-1975. It is famous for natural crocodile breeding. Other animals like deer, wild boar, monkeys, monitor, python, king cobra also found here.

Batighar is where the first lighthouse was installed on the eastern coast of India.[2] It is situated on the other bank of river Kharinasi. The height of this light house is 125 feet. Construction of this lighthouse was started on 6 December 1836 and it was lighted on 16 October 1837.

Kanika Palace is a massive palace constructed by King of Kanika. It was constructed on an area of 4 acres of land and height of the structure is of 75 feet. It is situated in Rajkanika Block.

Aul Palace is situated near Aul township. It is an ancient palace spread over 40 acres of land.

sakhibata is A 500-year-old banyan tree, mute witness to times gone by, has been accordedtourist spot status at Sakhibata in Kendrapara district. The gigantic tree, spread across 1.3 acres of land with about 600 trunks and sub-trunks, has been granted the tourist spot status by the state government following visits of tourists in the area throughout the year, District Tourist Officer Bijoy Kumar Mohanty said today. Funds have been sanctioned for building tourism infrastructure. A project has been permitted to have good road connectivity to the place. Besides a tourist cottage is being built, Mohanty said. The banyan tree withstood the devastating 1999 super cyclone. A 200-year-old temple is still intact at the spot. The temple is also a reminder of historic importance of the place,

Badakotha is an old building near the Kendrapara Bus stand. Once upon a time, Badakotha in Odisha only indicated to the 2 stair building of Radhashyam Narendra.

"Sri Chhualia Shakti Peeth" One and only tourist place of Pattamundai block. Maa chhualia is the adhisthatri devi of this peeth. This shakti Peeth is situated on the bank of the river the Govari in the village of Lokanathpur. It is a same distance of 12 km far from the nearest town Kendrapara and Pattamundai. The whole place is surrounded by sahada trees. Other trees like kadamba, krushnachuda, panihenduli, ashosth are also available here. The main thing is Maa takes nonvegetarian in food offerings (bhoga) for instance fish. But any types of meat or wine strictly prohibited here. Dola Melan, Raja, Panchuka, Biswasanti Mahayajnya, Asta Prahar Namayajnya are the festivals of this Peeth.

Hukitola is a storm proof go down constructed in the Jamboo island by British according to the wish of Captain Harris. It consists of 11 large size and 9 small size chambers.

Eka Kula is a unique island in kendrapara, which can be reached via bike during tide in the day time also you can reach there via boats from Jambu. This place is very beautiful once you reach there then you can feel like you are in heaven.

Also There are so many picnic spots in and around Kendrapara. Paradeep is only 20–30 km drive from Kendrapara. You can see the sea beach, port, Nehru Bangala(first prime minister of India had come here) and also see the entry gate of the river to Seashore. Pradeep is also the last point of the east coast of India.

PENTHA is situated in between the great River Chitrotpala & Luna (Karandia).It's only 12 km far from Kendrapara Town & 5 km from Patkura.Direct buses available from cuttack to Pentha.Itis famous for Maa sata Bhauni Temple (Among the Ancient Temple of Odisha) is situated in the middle of the village & Maa Kharakhai (Goddess Dhumabati),Gopinathjew temple,Ram Mandir, Sarala Mandir,Tarini Temple, Hanumanjew Temple & Nilakantheswar Temple. The Sandhha Nacha (Celebrated for the Memory of Sandha Raja of Kunjang Garh)at Dola Purnima.The Rama Charita Manas & Parayan Celebrated for 9 days (every Year) On the occasion of Lord Hanuman's Birth Day.It is also the Birthplace of famous Poet & Writer Mr. Kabibar Parida.

SIALIAA is situated in the RAJKANIKA block.The main and only attraction is that there is no doors in any houses of villagers. MAA KHARAKHAI is the GRAMA DEVATI of that village and she keep all the villagers as well as village safe from any type of incident, and many villages famous for their god & goddess like "BAIPADA" village is the smallest village of Kendrapara district Maa Boiti Nahakani is the "GRAMA DEVATI", In this village people believe that when a cyclone happened in 1999 that Maa Boiti nahakani saved this village when it was at risk from floods. Maa Boiti nahakani appeared in front of the flood and stopped it coming into the village. It is situated near Aul township. It is an ancient palace spread over 40 acres of land. Other structures like Rajbati, Ranimahal, Ghodashala, Bhandar, Udyan, Pramoda Udyan, Debalaya, Devi mandir are included in the palace.
Near a river, it was built in a serene atmosphere. It is a famous tourist spot. At a nearer place, lies the burial place of famous freedom fighter Dharanidhar Bhuyan.

False Point Port:
In front of the Batighar, it was the first modern port of Odisha coastline. At the mouth of river Mahanadi & Jamboo, this port was commissioned in the year 1855 and was in working condition until 22nd October 1924. A devastating storm on 22nd September 1885 completely destroyed this port. There was a submerged ship in the nearby sea, which is reminiscent of the past glory.

Batighar(Light House):
This is the first lighthouse installed in the eastern coast of India. It is around 45 KM from District HQ. It is situated in a village named Batighar, on the other bank of river Kharinasi. It is surrounded with pleasant natural beauty. Once upon a time, this was known as Kaudia Dwip and used as hunting ground of Kujanga Kings. Construction of this lighthouse was started on 6th December 1836 and it was lighted on 16th October 1837.

Kanika Palace:
Kanika Palace is a massive palace constructed by the King of Kanika, Rajendra Narayan Bhanja Deo. It is constructed on an area of 4 acres of land and the height of the structure is 75 feet.
It is situated in Rajkanika Block and is around 50 km from the district headquarters. The beauty of the palace is unbelievable. Bhitara Kanika was under the jurisdiction of the erstwhile Kanika Estate. It is covered with deep mangrove forests and saline rivers and was declared a sanctuary on 21.04.1975. It is a world famous place for natural crocodile breeding. The sanctuary is full of heavenly natural beauty and has innumerous animals like deer's, wild boars, monkeys, monitors, pythons and king cobras.