Cuttack district is one of the 30 districts of Odisha state in East India. Its administrative headquarters are located in the city of Cuttack. As of 2011, it is the second most populous district of Odisha (out of 30), after Ganjam

Cuttack has an Air Base named Charbatia Air Base for the exclusive use of the Indian Air Force. The nearest commercial airport is the Biju Patnaik Airport at Bhubaneswar, about 28 km away.

On 28 April 2010, the Ministry of Road Transport and Highways officially published a new numbering system for the National highway network in the Gazette of the Government of India. As per the new numbering National Highway 16 (former National Highway 5) runs from North to South of the City. As a part of the Golden Quadrilateral project, this highway runs from Chennai to Kolkata.National Highway 55 (former National Highway 42) connects Cuttack with Sambalpur. Also Asian Highway 45 passes through the city. Feeder State Highways connect Cuttack to Jajpur, Paradeep, Talcher, Angul, Kendrapara and nearby towns in Cuttack district. Intra city transport is primarily through Auto rickshaws. Nowadays DTS city buses ply in the city to join different places in the city and the state capital. Cuttack is a major junction connecting all the major parts of the state. The bus terminus at Cuttack is located at Badambadi, and is one of the largest bus terminus in India, and thousands of private and government buses ply to hundreds of destinations everyday. A new bus terminus at Balikuda is under construction to relieve pressure off the Badambadi Bus Terminus. 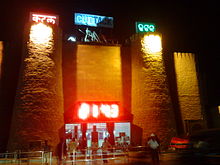 Cuttack Junction is one of the important stations on the Howrah, Kolkata-Chennai mainline of the East Coast Railway and falls under the Khurda Road division. A branch line to Paradeep starts from Cuttack. It is connected to all parts of India through trains run by the Indian Railways.The Cuttack Railway station is selected to be developed as a multi-functional railway station with a food courts shopping plaza, theatres to be developed. Other railway stations in the city are Baranga Junction, Balikuda, Matagajpur, Kandarpur, Kathajodi, Kendrapara Road, Kapilas Road, Manguli, Nergundi and Naraj.

There are religious establishments often built within close proximity of each other in Cuttack.

Cuttack celebrates festivals from all religions with much fanfare and devotion. Dhabaleshwar Temple is located on the shoreline of river Mahanadi, 37 km from Cuttack city, Orissa, India. Devoted to Lord Shiva, this godly shrine with its pure green environs, lifts up one's spirits to a morally superior plane.

Bhattarika Temple:
Bhattarika Temple, located in sasanga village, baramba, Athgarh, Cuttack District, India is dedicated to the Hindu Goddess Maa Bhattarika worshipped as a manifestation of Shakti. The temple is situated on the banks of the River Mahanadi. As per Puranic tradition, Parasuram facing certain defeat at the hands of Saharasjuna prayed to Durga who appeared on this spot to impart her divine power to the aid of Parashuram.

Ansupa :
Nearer to Athagarh, Ansupa is a small but picturesque lake offering an asylum to migratory birds in winter. The water spread is ideal for fishing and boating. The nearest bus stop is Athagarh. Regular bus services are available up to Athagarh from Cuttack. One has to travel the road distance from Athagarh to Ansupa (14 kms) either by hired Taxi/ Auto rickshaw The ruins of Barabati Fort with its most and gate and the earthen mounded of the nine-storied palace of the Ganga dynasty lie on the bank of the river Mahanadi as the silent witness of the vicissitudes of Odisha history. Another item of interest is the Barabati stadium adjacent to the fort. The stadium with its impressive structures covers an area of twenty-five acres and affords sitting capacity for thirty-five thousand persons. One of the earliest Buddhist sites, Lalitgiri was visited by the Chinese traveller Huien T Sang in the seventh century A.D. The large numbers of antiquities excavated here testify this place to be a part of the Puspagiri Buddha Vihar. Regular bus services are available from Cuttack to Paradeep and Kendrapara via Chandikhol.

Cuttack Chandi:
The Katak Chandi Temple is an ancient temple dedicated to the Goddess Chandi, the presiding deity of Cuttack, Odisha. The temple is located nearby the banks of the Mahanadi River. It is famous for the annual Durga Puja and Kali Puja festivals. The Barabati Stadium is a cricket and association football venue in the east Indian city of Cuttack, Odisha. It is the home ground of Odisha cricket team and is operated by Odisha Cricket Association.
Odisha First Division League football matches are also held at the stadium. The Barabati Stadium is one of the older grounds in India, having hosted several touring sides including the MCC, the West Indies team and the Australians before it hosted its first international match.

Cuttack is widely known as the commercial capital of Odisha. It is believed to have the largest GDP among all cities in Odisha due to its large business houses and a wide range of industries ranging from ferrous alloys, steel and logistics to agriculture and traditional industries like textiles and handicrafts. There are many trading houses in the city renowned nationally and internationally.